“An Attempt At Simplifying Central Sensitization” 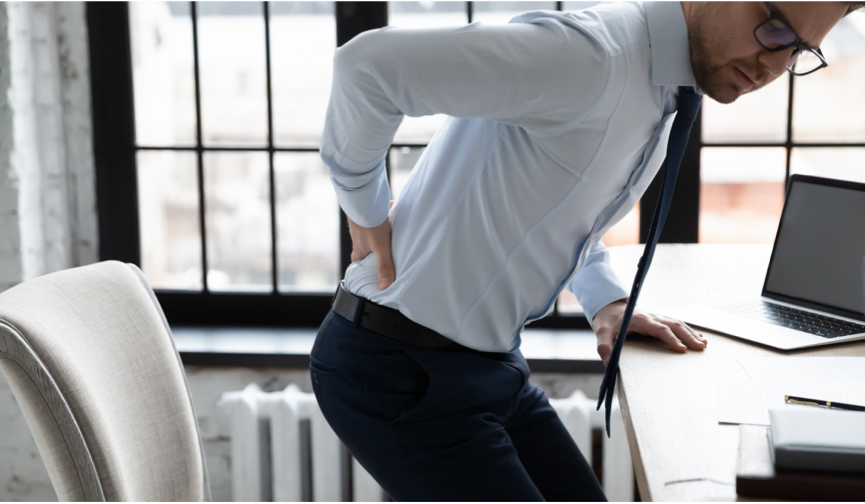 This week’s guest blog is from Jamie Johnston

Have you ever had one of those appointments where you’re not sure of the outcome or the patient interaction?

I remember having a patient back in college who would come in for treatment of back pain. The person was in their early 20’s and told me they were dealing with chronic pain in the area.

During the first treatment, as soon as I put my hands on them and pressed down, they quickly informed me that was too much pressure! So, of course, I backed off and used a much gentler touch.

So, I treated the person a few times; then, they booked in with one of my classmates.

However, during their treatment, the patient said “your treatment was okay, but you don’t use as much pressure as Jamie”!

We were both perplexed as my classmate said they were using very light touch (I think I had put something in the treatment notes about pressure).

Neither of us could figure out what was the correct approach. There is a chance this was just therapist preference, but there’s also the possibility of something called Central Sensitization.

It’s probably important to start by talking about Nociception.

Nociception itself is not pain; it is the detection of noxious stimuli, which is a protective response that generates a reflex withdrawal to get us to stop doing whatever thing we are doing that could cause tissue damage. (1)Another result of this is it helps us avoid doing those things again (think the first time you put your hand on a hot stove, and will likely never do that again).

When sensitization of this nociceptive system is repeated or more intense than usual, then the amount of stimulus needed to create pain decreases and becomes amplified. (1)

So, for Central Sensitization to occur, an intense stimulus has to happen repeatedly over an extended period. (1)Think of something like jabbing your forearm with a sharp pen for a couple of minutes (don’t actually do it, I’m just giving examples!). Doing the same thing with the pen for 5 seconds won’t have the same result.

When this happens, it leads to Nociception no longer being a protection, and pain can arise out of nowhere.

This can result in allodynia and hyperalgesia, and it is necessary to recognize the difference between the two.

Hyperalgesia is where an increased response at a normal threshold or increased threshold creates an enhanced pain sensitivity. This is common for things like neuropathy.

Allodynia is pain from something that shouldn’t be painful. Like the touch of a feather, as you can see in the image below.(2) 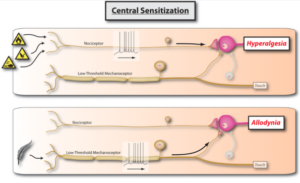 As well, pain can be exaggerated and prolonged because of its response to noxious stimuli and can spread to other parts of the body, which is called secondary hyperalgesia

The research papers cited show a whole host of molecular changes and activities in the spinal cord that lead to CS, but I’m not sure we have to know those specifics. It is important to know that these changes are happening in the dorsal horn of the spinal cord which is sending signals to the brain.

Another essential takeaway is how there is no single defining mechanism; it’s a general phenomenon that changes how a stimulus is interpreted.

Well, this may be in part because of some CS occurring with them. Because tissue injury is not necessary, and pain can be maintained even though there isn’t any injury that has happened (recently), these may be signs that something more is going on.

However, we aren’t able to diagnose this, but it may be vital for us to recognize it. So, let’s look at some conditions where this is common for people to experience this.

So, part of the issue with CS is that the CNS can change, distort, and amplify pain all without an actual noxious input. When we look at the lack of an injury, it may seem as though the pain isn’t real, but it most definitely is.(3)

So, imagine what this is like for the patient sitting in front of you. Especially when there could be things like work-related compensation etc. involved. (3)

Another aspect regarding this condition is that it is complicated to diagnose because we cannot measure sensory input. So, pain hypersensitivity alone isn’t enough to say someone has CS. Some of the things they look at to determine if it is CS are (and remember how I said ‘a whole host of molecular changes and activities in the spinal cord that lead to CS, but I’m not sure we have to know those specifics’): (3)

So, clearly, for us as Massage Therapists we wouldn’t be able to develop an accurate diagnosis for one of our patients, as much of this would have to be seen under MRI.

However, we can look at some conditions where we are more likely to see this as CS can influence the following:(3)

Okay I get it, that’s a LONG list. This post was intended to be a way to simplify what CS is, but there really are no ‘simple’ answers, especially for what we do to help patients. So there may not be a lot we can do treatment-wise, but what’s really important is to recognize what the person is going through. They may not get a CS diagnosis; they may not get any kind of diagnosis at all.

And we know that patients (and insurance companies) really want to get a diagnosis to understand what is going on. So, our role may be to simply VALIDATE, VALIDATE, VALIDATE, the person sitting in front of us. You may be the first person who believes this person is in pain. Take the time to listen to them, let them talk, and support them! While you will likely have to adjust the pressure you use during treatment, those treatments may become supported self-management, and you may become their biggest ally for their journey. I don’t know to this day if that person I saw while I was a student had CS, I just hope I did a good enough job of minimizing their pain and feeling good, even for just an hour at a time.

If you’d like to get more in-depth with the topic of Central Sensitization, Dr. Melissa Farmer has a great four-part series on the topic which you can read HERE 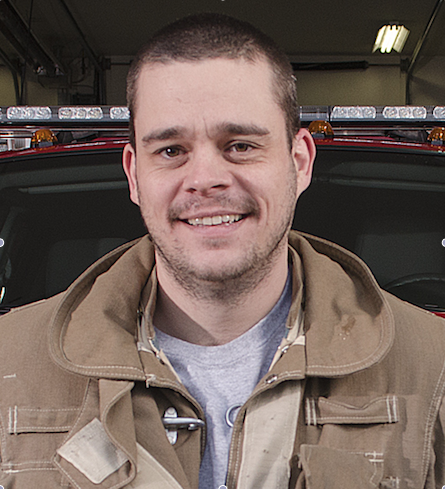 Jamie is a Registered Massage Therapist, former massage college instructor, first responder/first aid instructor and volunteer firefighter in Victoria BC. He graduated from the West Coast College of Massage Therapy in 2010 and has been working with a sport and sport injuries focus. As a massage therapy student, he began volunteering with the Victoria Grizzlies Junior A hockey club and has been with the team ever since as a RMT and first responder.

He also instructs first aid and first responder courses. He enjoys teaching both RMTs and his colleagues about first aid and how to handle medical emergencies within their practice, and considers it to be one of the best parts of his career.

As a massage college instructor, he works as a supervisor in the student clinic and sometimes still can’t believe that he’s lucky enough to be a part of moulding the upcoming graduates in the field. He’s always excited to meet new students and still learns something from them every time.

When not at work you can find Jamie at the gym, at the ice rink, on the golf course or at the firehall.

You can find out more about Jamie at https://themtdc.com